At present, the pilot models are back in Korea having the finishing touches applied to the bodies and new trucks cast. The photos below are of the models as they were at the March Meet in Chicago over the weekend of March 18 – 19. The pilot samples will be back at MMW sometime after April 17, at which time new photos will be taken and posted on this page. These photos primarily show the detail level of these models’ components and full ‘roster’ type photos will be posted after they arrive in April.

These accurately constructed, two-piece radiator screens are designed and made just like the real ones are – the grille is ‘bolted’ to the body, which houses the internal screen. Even the shutters are visible behind the screen as on the prototype. 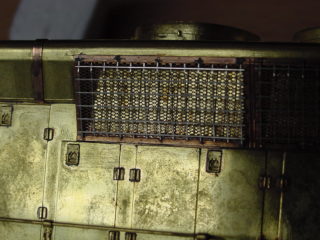 The dynamic brake grilles are not cast as has always been done in the past. These are fabricated as the real ones are. They have separate fins that are attached to three rounds that pass through them. They are as authentic as they can be. 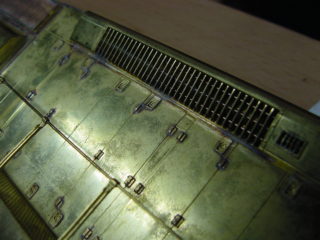 The steps are not castings either. They are formed as the real ones are. They also have the correct scale through hole size and pattern. 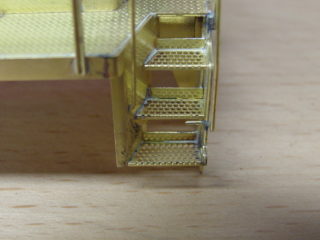 The fan grilles are also very fine scale. Upon close inspection they are also etched to have an overlapping appearance of the grille components as does the real thing. The fans are not installed in this picture, but the accurately scaled fan bracket can easily be seen through the grille. 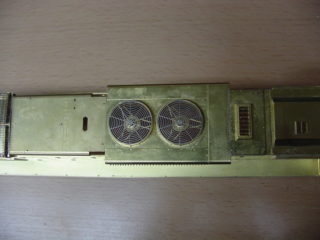 The shutters/louvers over the radiators on SD40T-2 and SD45T-2 types will open and close as originally promised. Close inspection here shows them first in the closed position and the second shot shows them in the open position. 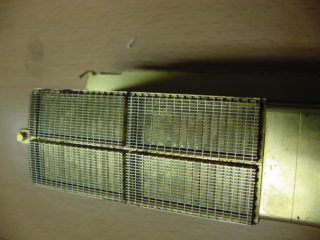 The frame of the locomotive is also modeled after the prototype. Fabricated I-beams are used instead of a formed channel. There will be traction motor cables and air lines attached when the pilot models return in April, but they weren’t yet applied for these photos. One can also see the correctly modeled jacking pads and frame under the sill. The gusset for the jacking pad frame has the correct holes through it as seen on the prototype. Also of note are the inspection lights with their correctly modeled brackets mounted to the frame – not simply soldered to the sill. 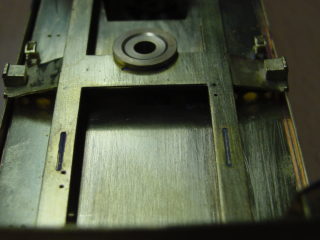 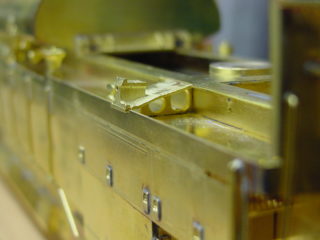 There were many who doubted the feasibility of having scale truck frames cast that would have the correct detail on both inside and outside. I believe these next photos will dispel any skeptics of this concept. This is the very first of the prototype truck frames and it is by no means perfected yet, but the frames are straight and they are to scale. Mr. Song has assured me that the next sample truck frames when received in a few weeks will be sharper and cleaner. 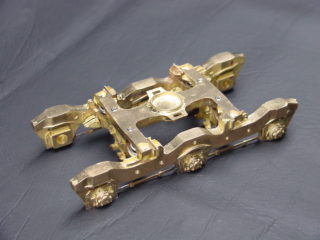 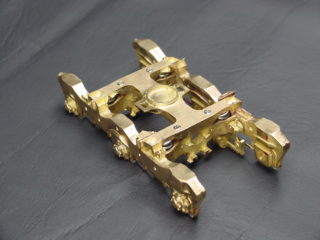 These trucks will be fully detailed in every way. The underside view shows the double transom that existed on the prototype. This is what the real thing looks like. Much of the brake rigging has yet to be added, but it is obvious by the one brake cylinder that IS mounted, that these are not simply cast into the sideframe as has been done on O Scale diesels in the past. The brake rigging is independent and mounted in scale brackets just as it is on a real locomotive. The last shot shows the frame with the traction motor gearboxes placed where they will be when the truck is fully assembled. 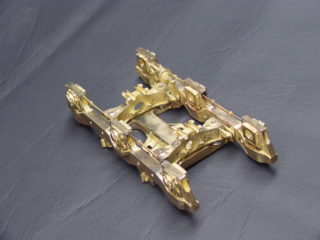 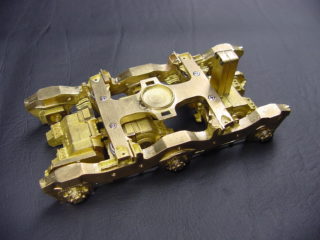