will be powered by the same control unit that operates the lights. The fans will operate as if they are thermostat controlled, as would be the case with the fans on prototype locomotives. When sitting in a siding or waiting to pull out of a yard with a train, the fans will run less often and for shorter periods of time.  As the load on the locomotive increases and it ramps up and pulls out, the fans will run for a longer amount of time and will not stay off for as long. The harder the locomotive works, the more frequently and longer they will run. 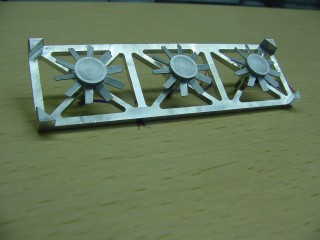 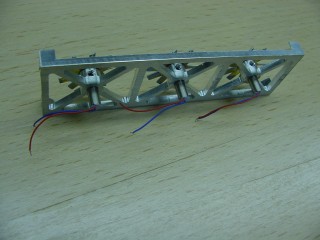 Radiator fans mounted in their bracket. Note the small motors on the back which allow them to be operational. (Click to enlarge)

will be operational as well. They will remain off until the operator slows the train by way of lowering the voltage. When a preset voltage drop occurs the fans will begin operating. They will continue running until the decrease in voltage levels off, at which time they will shut off – simulating dynamic braking. 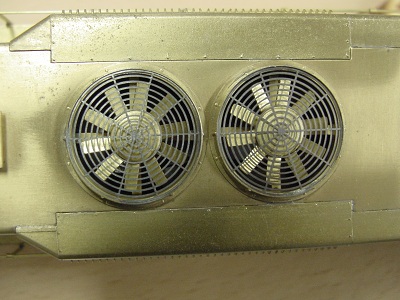 Fan grilles will be fine scale so the fan blades will be visible – as on a prototype locomotive.

Fans will not function without DCC or our AC injector.